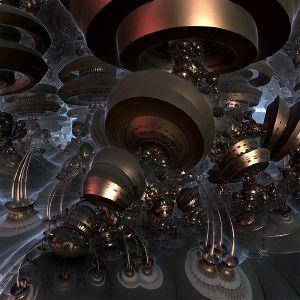 are based on the phenomena of quantum mechanics

, as opposed to familiar classical computers based on transistors which encode data into binary digits (bits). In traditional computing, this process always leads to one of two possible states (0 or 1). [1] However, quantum computation relies on qubits

that can express many different states simultaneously ("superpositions"), meaning that when/if this technology is fully developed, it will be capable of solving some types of mathematical problems virtually instantaneously. [2] [3]

Assembling a quantum computer is now an engineering problem rather than one impeded by laws of physics -- a theoretically imperfect machine can still yield useful results. Military and government agencies have invested heavily in this area because of the implications for today's widely used public-key cryptography. [4] Ciphertext that is invulnerable to classical computing will be shredded into ribbons by a large-scale quantum computer. Similarly, all Tor traffic will be vulnerable until quantum-resistant cryptography is implemented.

The Snowden documents reveal that all encrypted data traversing the internet is intercepted and stored indefinitely for cryptanalysis should there be a scientific breakthrough. A global arms race has ensued between the United States, EU, Russia, China, Israel and other global powers due to the immense geo-political, economic, intelligence and military advantages this technology would confer.

The academic and corporate consensus is that a large quantum computer will be built in around 10-15 years. It is safe to assume that well-funded intelligence communities are capable of greatly reducing this development period.

of NIST PQ cipher standardization has concluded. The 26 candidates are grouped into finalist and alternate

groups which will be reviewed for another 12-18 months. NIST plans to release the initial standard for quantum-resistant cryptography in 2022

. The finalist group has better performance, but less security confidence while alternate candidates have a stronger security rationale, but lack performance for all use cases. Only one cipher of each design type will be standardized, for example one lattice based asymmetric crypto and one lattice based signature scheme will be selected out of the group. A fourth round looking at alternates for standardization is planned.

The emergence of quantum computers would break all asymmetric public-key cryptography and signature algorithms used today -- the type of cryptography that protects communications over the internet. The size of symmetric keys is also halved, meaning the strength of 256-bit keys would be equivalent to 128-bit keys. This is the type of cryptography used for Full Disk Encryption, when data is encrypted with a passphrase.

The solution to this threat is Post-quantum Cryptography ("PQ Crypto"). This provides a drop-in replacement for cryptographic libraries already deployed, except different types of "quantum-hard" mathematical problems are used so cryptanalysis is difficult for both classical and quantum computers.

Competent cryptographers are gradually improving the performance of PQ Crypto and designing cipher-suites that are efficient for everyday use. For instance:

While Bruce Schneier has praised the NIST process for PQ cipher standardization as it nears its close [9], Daniel Bernstein has pointed out the consistent non-transparency of the organization and its secrecy about input from outside entities like the NSA who have a vested interest in subverting cryptographic designs. NIST non-responsiveness to FOIA requests culminated in a lawsuit by DJB. Among many problems he pointed out, is the skewing of design guidelines that weaken security in the name of performance despite being illogical [10], choosing patent encumbered ciphers like KYBER when NTRU Prime would have sufficed [11] and refusing (under NSA influence) to accommodate hybrid key-encapsulation mechnism (KEM) designs where strong non-PQ ciphers are combined with experimental PQ ciphers to hedge against fatal weaknesses that these new, less studied ciphers may have against the mathematical attacks known today.

The Free Software listed below is known to resist quantum computers, but this is not an endorsement for any particular tool. To mitigate potential exposure to unknown software implementation failures, it is recommended to set up arbitrary protocols over Tor Onion Services once PQ Crypto is deployed. The exception is the use of one-time pads which are secure from an information-theoretic perspective

Before adopting any software, first consider if: [13]

This is a GnuPG-like Unix program for encryption and signing that only uses quantum-resistant algorithms: [14] [15]

Codecrypt is free software. The code is licensed under terms of LGPL3 in order to make combinations with other tools easier.

Even without direct Thunderbird support, it is still possible to format messages to account for replies. However users should be careful to not mistakenly send unencrypted replies. It is advisable to disable the Internet connection temporarily to prevent the accidental sending of messages before they are encrypted with Codecrypt, and because TorBirdy is no longer available to automatically disable draft syncing on the host email server.

[22] is a program that sets up a one-time pad on a user's computer, and helps to protect from reuse of pads which breaks the overall security model.

OneTime can encrypt any kind of file -- it does not matter if the file's contents are Base64-encoded or not, because OneTime is not interpreting the contents. OneTime simply treats the file as a string of bits. Notably this is true for most encryption software; OneTime is not unique in this regard.

One-time pads should be completely secure against cryptographic attacks by quantum computers or other avenues. So long as the encryption key is truly random and the key is as long as the message, then all possible plaintexts are equally likely. Quantum computers are not telepathic, so messages properly encrypted with a one-time pad will remain impervious to cryptographic attacks. Of course, using the system is difficult in practice due to the logistics of key exchange, but quantum computing does not affect that reality. [23]